The Minaudière – A Girl’s Best Friend!

Looking for the perfect bag to brighten up your Christmas party outfit? Look no further as the Minaudière is the ultimate accessory!

First patented by luxury jewellery house Van Cleef & Arpels in 1933, the Minaudière is a small ornamental handbag, frequently made from precious metal with varying compartments for lipsticks, combs, powders, and blushers. The idea was inspired by American socialite, Florence Gould, who used to carry her make-up, comb and lighter in a cigarette case. The name for these special bags was inspired by Estelle Van Cleef, whose mannerisms (minaudières) captivated her family and friends.

Minaudières were created by most major jewellery houses in the mid-20th century; these include Tiffany & Co., Boucheron, Chaumet and Asprey as well as Van Cleef & Arpels. We are pleased to offer two examples of this extraordinary accessory in our forthcoming Bond Street Auction going online on Friday 1st December! 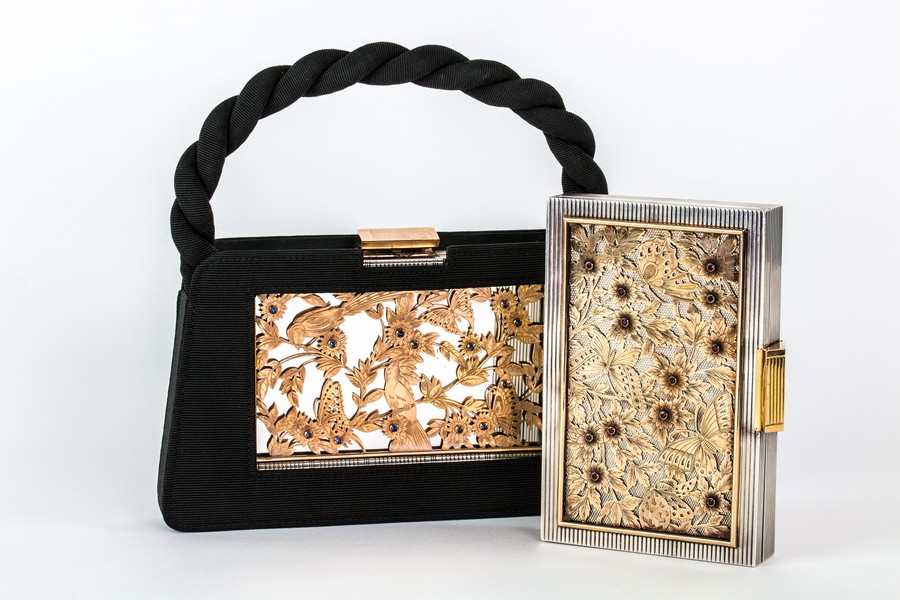 This Minaudière is a beautiful example of its time and in fantastic condition. The rose gold butterfly and foliate ornamentation is exquisite – enhanced by faceted ruby stigmas, opening to reveal three powder compartments, springing lipstick holder and comb holder. Complete with French assay marks throughout, this is the ultimate chic statement bag.

A mid-20th century Boucheron Miniaudière of bi-colour design – The floral and foliate front with blue gem accents atop the geometric case. It contains a mirror, lipstick holder and other varying compartments within a fabric Boucheron carry case. Weight 497.58 grams.

We are proud to present this Miniaudière by famed jewellers Boucheron. The house of Boucheron was formed in 1858 and has remained at the forefront of fine jewellery houses ever since. This finely detailed bag is decorated with exotic birds, butterflies, and flowers with cabochon-cut blue gemstone stigmas. Inside the piece boasts two lipstick holders, mirror, comb holder, and three compartments. The piece also comes with a Boucheron fabric carry-case, perfect for any fashionista!