Ethically sourced directly from precious gemstone mines all over the World – including but not limited to Burma, Sri Lanka, Tanzania and Zambia – only the finest natural stones had been selected for the collection, valued at over £8million retail.

All precious gemstones within the collection were originally sourced as loose gems, only in the recent years leading up to the instruction, had these gems have been set and mounted among diamonds, into pieces of fine jewellery, to showcase their desirability and make them a suitable offering for the international public auction market.

Our private client had collected and amassed the gemstones for nearly 20 years, after buying a highly-prized 133 carat Tanzanite – which ignited a passion to source a range of gemstones from all over the world.

Subsequently, through decades of global travel, our private client became established and recognised by gemstone miners as one of Europe’s preeminent buyers of natural coloured gemstones.

Some of the world’s rarest and purest rubies, emeralds, tanzanites, sapphires and other prized gems forming over 680 gemstones from the esteemed David Jerome Collection were presented to the international market by John Pye Auctions Luxury Assets Division with the opening our showcase premium saleroom sat offices at Standbrook House, 5 Old Bond Street, Mayfair, London W1.

A series of three online auctions for The David Jerome Collection were held in the run up to Christmas 2015 , showcased across the UK from Manchester United to Mayfair, and attracted international interest of bidders and buyers, marking John Pye Luxury Asset’s launch and arrival within the international luxury market sector. 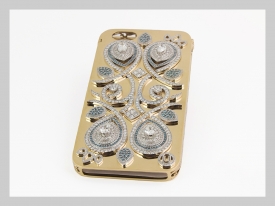 One of the World’s most expensive mobile phone cases is being offered for sale through our Luxury Assets division in Mayfair, London. Our Luxury Asset department presents a unique opportunity to own a stun...
> Read more

Purchasing a luxury time piece should not be done on a whim! Investing your time in looking at various brands, models, sizes and functions will help you choose wisely. Here at John Pye we offer a fantastic r...
> Read more

How To Care For Your Jewellery

So, you’ve purchased your item of jewellery from one of our online sales, but how do you care for your new purchase to maximise sparkle, shine and most importantly the amount of time you can wear and enjoy...
> Read more

How To Find The Perfect Piece of Jewellery

Try on as many different styles as possible! It is important to get an idea of what colour metal, stones and designs suit you – so use our viewing days at Marchington and Bond Street to try out as many sty...
> Read more

Things To Look Out For When Buying Coloure...

Before viewing prospective gemstones, think about your reasons for potentially purchasing one, as this could inform your choices. Are you purchasing a gemstone to mount into a piece of jewellery?
> Read more
Login